On Thursday, June 29, 2017, senior executives from Minera Exar, Lithium Americas and SQM attended a meeting in Buenos Aires with government officials from Argentina, including the President of Argentina, Mauricio Macri, and the Governor of the Province of Jujuy, Gerardo Morales. All parties reaffirmed their commitment to support the development of Cauchari-Olaroz.

Gabriel Rubacha, Lithium Americas’ President of South American Operations, commented: “We are receiving full support from the Federal and Provincial governments, and we are very pleased with the progress we are making on the development of the project. There are over 100 people on site today and the Minera Exar organization is growing with the recent recruitment of additional executive level personnel.  Minera Exar is proceeding with the development of the project and progressing with the early construction activities following a timeline target of being in production by 2019."

Patricio De Solminihac, CEO of SQM, commented: “We were pleased to meet with Mr. Macri and Mr. Morales to discuss the importance of Cauchari-Olaroz, and the shared responsibility and mutual benefits of investment and timely execution of development. We shared with the President our plans for capital investment and employment, and the construction timeline to achieve our production targets. SQM is firmly committed to the advancement of the project and to the success of Jujuy-based Minera Exar.” 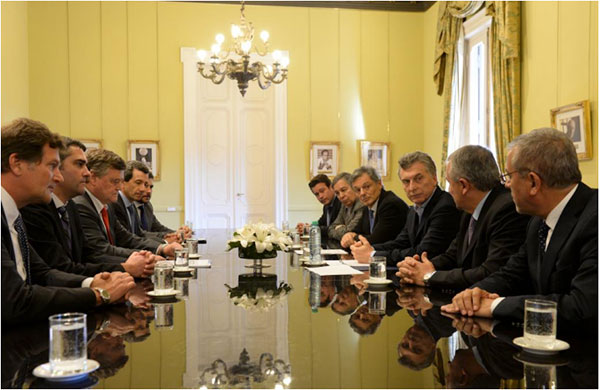 To fund Lithium Americas’ share of Cauchari-Olaroz capital costs, on June 7, 2017, Lithium Americas closed on the strategic financing with GFL International Co., Ltd., a wholly-owned subsidiary of Jiangxi Ganfeng Lithium Co., Ltd. (“Ganfeng Lithium”) agreeing to provide US$172 million in financing. With respect to the second financing of approximately US$112 million from BCP Innovation Pte Ltd., a wholly-owned subsidiary of Bangchak Corporation Public Company Ltd. (“Bangchak”), closing is expected to occur around mid-July.

As part of the Bangchak strategic financing, Mr. Chaiwat Kovavisarach, Bangchak’s President and CEO, has been included in the management slate for the Board of Directors to be elected at the Company’s upcoming AGM on August 14, 2017.

Lithium Americas, together with SQM, is developing the Cauchari-Olaroz lithium project, located in Jujuy, Argentina, through its 50% interest in Minera Exar. In addition, Lithium Americas owns 100% of the Lithium Nevada project (formerly Kings Valley project), and RheoMinerals Inc., a supplier of rheology modifiers for oil-based drilling fluids, coatings, and specialty chemicals.

Statements in this release that are forward-looking information are subject to various risks and uncertainties concerning the specific factors disclosed here and elsewhere in the Company's periodic filings with Canadian securities regulators. Forward-looking information in this news release includes : (i) the timing for completion of the Stage 1 development of the Cauchari-Olaroz project; (ii) timing for an updated EIS at the project; (iii) the timing to commence production on the project; and (iv) the anticipated date for closing of the Bangchak financing.  When used in this document, the words such as “intent”, “target”, “expect”, “estimated” and “scheduled” and similar expressions represent forward-looking information. Information provided in this document is necessarily summarized and may not contain all available material information.

All such forward-looking information and statements are based on certain assumptions and analyses made by Lithium Americas management in light of their experience and perception of historical trends, current conditions and expected future developments, as well as other factors management believes are appropriate in the circumstances, including in the case of the credit agreement with Ganfeng, the implementation of the agreed security interest structure and satisfaction of other customary conditions to first draw-down. These statements, however, are subject to a variety of risks and uncertainties and other factors that could cause actual events or results to differ materially from those projected in the forward-looking information or statements. Important factors that could cause actual results to differ from these forward-looking statements include those described under the heading "Risks Factors" in the Lithium Americas’ most recently filed Annual Information Form and other continuous disclosure filings.  The Company does not intend, and expressly disclaims any obligation to, update or revise the forward-looking information contained in this news release, except as required by law.  Readers are cautioned not to place undue reliance on forward-looking information or statements.